Where do these funny fruits come from, and, more importantly, how do you eat them? Photo by Samantha Forsberg. Pomegranate. CC. https://flic.kr/p/q5bhL8

Last week I took a gamble and picked three pomegranates off the discount fruit and veggie rack. But when I got  back to my kitchen I realized I was vastly under prepared. Was it normal that the seeds were pink instead of red? Were they overripe? What would rotten seeds taste like? Were they worth the six dollars?

It got me curious about pomegranates, so here’s a few things you may not have known about this so-called “super fruit”.

Having a fruit split on the tree is the last thing producers want. Photo by Nicolas_gent. Pomegranate open, exposing the bright red arils. CC. https://flic.kr/p/dvwm13

You’d think this juicy fruit was born in a steamy rainforest. But it wasn’t.

Pomegranates came from dry, desert-like places like Persia, Iran and Afghanistan. They love cold winters and hot, dry summers and can live through long droughts.

Humidity does bad things to the fruit. If it rains too much the fruit fills up with water and gets soft and becomes difficult to ship. August rain can split the fruit on the tree, sometimes turning them inside out. In addition, too much rain in the spring may cause Alternaria fungus, which gets into the blossom and rots the fruit from the inside out. Eww.

Pomegranates were some of the earliest domesticated fruits. Photo by John Morgan. Pomegranates. CC. https://flic.kr/p/4rnCeQ

Pomegranates were one of the first cultivated fruits along with olives and dates. The cool, refreshing tree was brought to other arid regions of India, China, and the Mediterranean. Pomegranates eventually made their way to Spain, where the city of Granada is named after them. Today the world’s main producers are still India, Iran, Turkey and Spain.

The Spanish loved the fruit so much that missionaries brought the fruit to Mexico after the conquistadors had finished slaughtering the locals. The missionaries continued to grow the fruit in their gardens as they expanded north to California, which remains the primary U.S. producer.

Pomegranates have been aggressively marketed for their heart-healthy, cancer-fighting goodness. This is because North Americans are not eating very many, balking at paying high prices for a fruit that is at best daunting to eat.

The superfruit claims are based on laboratory tests that show pomegranates have antioxidant, antibacterial, and antiviral properties. However, these studies were done in test tubes and in mice, and the effects haven’t yet been seen in human. This means there’s no evidence yet that pomegranates can prevent cancer or heart disease.

This doesn’t mean pomegranates are unhealthy. Far from it. They’re full of vitamin C and important nutrients like calcium, iron, magnesium, and phosphorus.

Photo by four years. Some people grow pomegranate trees simply for the beauty of their flowers. Pomegranate tree. CC. https://flic.kr/p/7f8maB

The crown on top of a pomegranate is made from the leftover petals from the blossom. Pomegranate plants have male flowers, which don’t make any fruit, and flowers with both male and female parts, which do. They are pollinated by bees.

Many people grow pomegranates as ornamentals because of their attractive orange-red flowers. In tropical America it’s grown in gardens just for show, because, as we know, humidity does bad things to the fruit.

While pomegranates can be coerced into being a tree, they really prefer to be hedges and bushes with multiple trunks. In fact, hedges are often better for farmers than trees. Pomegranate trunks are very sensitive to frost, and if grown in a bush farmers can lose a few trunks to frost without losing most of their crop.

Repeat after me: these are not seeds! Photo by Aaron. Pomegranate. CC. https://flic.kr/p/dkeNTg

What’s an aril? It’s the little sac of juice around each seed in the pomegranate, the part that actually tastes good.

By definition, an aril is sweet, attractive tissue stuck to a seed that makes birds and animals want to eat them and poop them out somewhere else. Other plants, like yew trees, also have arils.

Pomegranate arils can range from white to dark red. White or pink are usually sweeter than dark crimson.

While we’re on the topic of colour, in North America we’re used to the Wonderful variety of pomegranates with a bright scarlet peel, but the peels of other varieties can range from off-white to yellow to purple.

What to do with them? 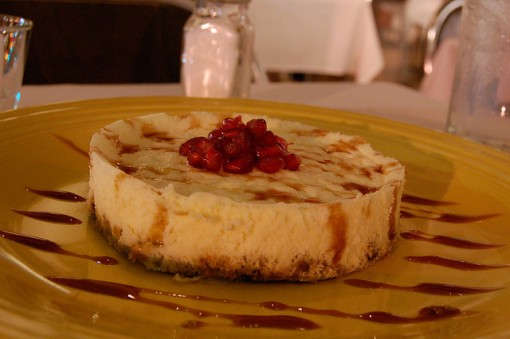 My biggest question about pomegranates was how to eat them. Apparently my technique of cutting them in half is not the most efficient answer. The best is to slice off the top near the stem, score the skin into segments and then pull the segments apart. If you put the fruit in a bowl of water while you’re doing this the peel floats to the top and the arils will sink.

Ripe pomegranates look slightly square because the ripening arils push against the sides and flatten them. An unripe fruit is round like an apple. Whole fruit will keep up to 2 months in the fridge, and fresh juice or seeds up to 5 days. The arils can also be frozen.

Grenadine syrup, a flavoring for mixed drinks and an ice cream topping, is made from pomegranate juice. Apparently you can also make pomegranate wine, puddings and jellies.

Now you’ll have something to ponder next time you dissect a pomegranate.

I am a recent biology graduate and current journalism student exploring career opportunities in science communications.
View all posts by Amelia →

Have questions, feedback, or suggestions for my next post? Put your thoughts here! Cancel reply